Happy Sunday, everyone! This weekend I was happy to spend some much needed time just being at home. I have been out of town the last few weekends and so it felt great to spend some time relaxing. Since the fall feeling and cooler temperatures have officially moved in I spent part of my weekend preparing my Halloween decorations for this year!

After work on Friday I took a trip to Target to pick up some pumpkin decorating supplies. I was able to find some great things to use (many of them in the dollar section) and spent Saturday morning on my pumpkin project. A couple of weeks ago on my most recent trip to Hobby Lobby I picked up some supplies to make a Halloween wreath. I made it a couple of weeks ago but got it all hung up this weekend with the rest of my decorations!

The wreath that I made was extremely simple but it stands out and has a lot of fun flair to it. What I purchased to make the wreath was: 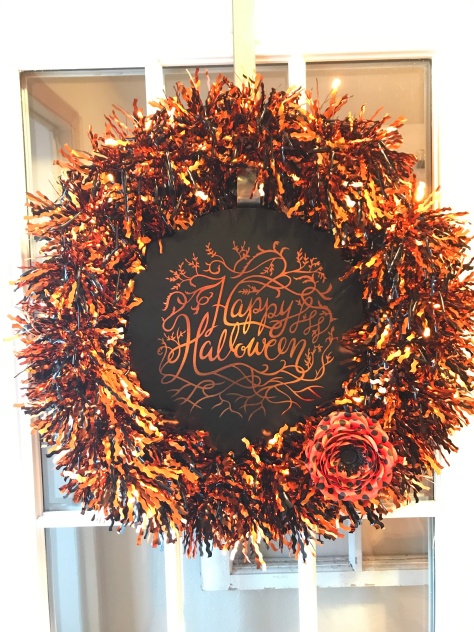 This project took less than 10 minutes to make and supplies cost me less than 20 dollars but I think it looks like a million bucks 🙂 All that was required was a hot glue gun to secure the ends of the garland on the wreath form. I then wrapped the garland tightly, stopping to glue every few wraps around. I then affixed the patterned flower to the bottom and then after the wreath was hung on the door I hung the circular sign on the wreath hanger and then settled it in to rest on the wreath form against the door.

I reused a few of last year’s decorations this year because they can be used again and again! I bought these fun outdoor spider lights at target. They are colored spiders with glittered legs and look fun hanging on the outside of my patio wall. All of the items resting on the ledge of my patio wall are from Target’s dollar section last year. The orange and black lantern pumpkins light up at night and the 2 signs (“Be a little wicked” and “happy halloween”) are both double sided. Since it is so windy around here all the time I affixed the signs to the ledge with command strips on the bottom so that they don’t fall off. 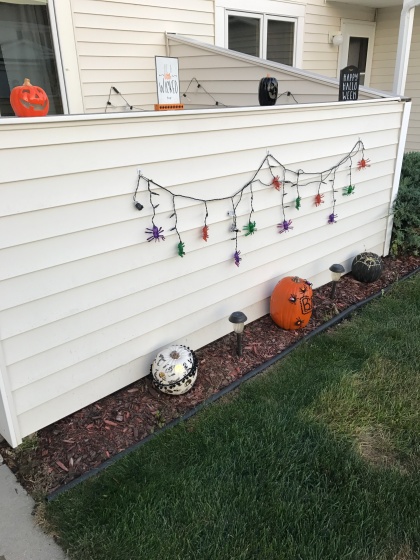 This year I was also able to reuse the 3 craft pumpkins that I purchased last year at Hobby Lobby. I removed all of last year’s decorations (you can check out my pumpkins from last year for more ideas by follow this link!) and they were good as new and a fresh slate to use for this year’s ideas! I did reuse some of the decorations from last year’s pumpkins but did also purchase some new things. I have never been a skilled pumpkin carver so decorating pumpkins externally is a better option for me 🙂 that is why I decided investing in craft pumpkins that I can use for multiple years would be more cost effective for me. 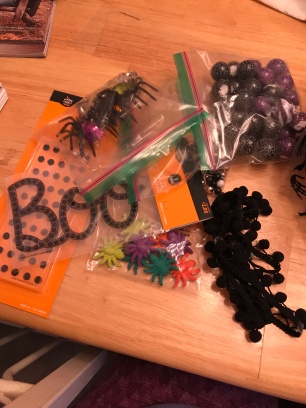 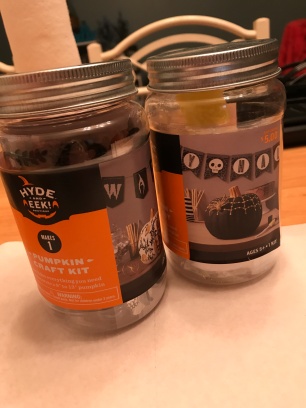 Above are pictures of some of my supplies for my pumpkins. This year I bought two different “pumpkin craft kits” from Target which are the two jars on the right hand side. They are pre-packaged in the cute jars and contain everything you need to match the pumpkin deocrations pictured on the jar. They contained paint, stickers, string, etc. I also bought some other items separately such as an adhesive “Boo”, spiders, black stick-on spikes, and then re-used the black pom-pom garland from last year. I am really happy with how each of the pumpkins turned out and it’s fun to have 3 different colors! One orange, one white, and one black pumpkin. 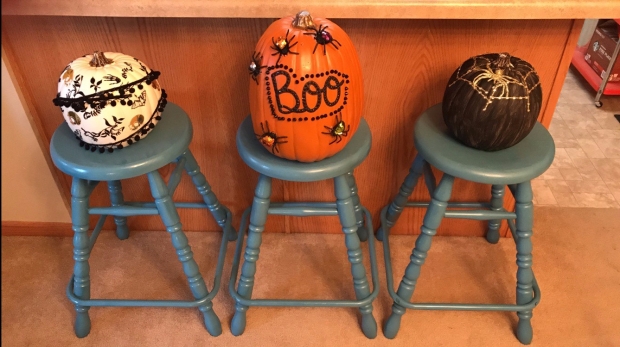 I will show each of them up close below and let you know which items I used to create and decorate each one! 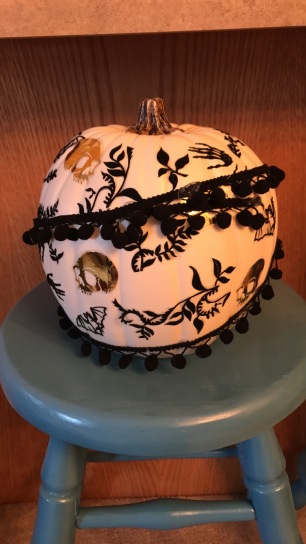 Both of the smaller pumpkins I decorate using the two pumpkin craft kits I bought at Target! Both pumpkins were white to begin with but one of the kits I bought contained black paint to use. I painted the pumpkin black and let dry overnight. Then the next morning I adhered the different lengths of gold “spider web” adhesive stickers to create a spider web pattern on the top of the pumpkin. The kit also included a gold piece of string and the big gold spider which I tied to the stem of the pumpkin so it’s resting on the web.

The white pumpkin I decorated with the other kit I purchased which contained the gold skull stickers as well as lots of black felt stickers. The felt stickers have shapes like bats, skeleton hands, and floral patterns. The stickers attached easily to the pumpkin and I just placed them on randomly. After I was done with the stickers I re-used the strand of black pom-pom garland from last year and hot glued it as I wrapped it around the pumpkin! 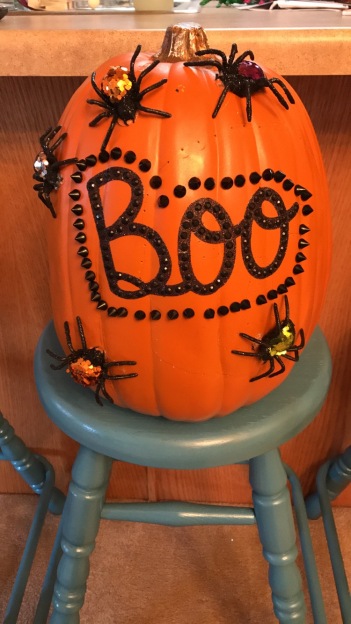 The orange pumpkin from this year is my favorite! I attached an adhesive “Boo” from Target on the front that is made of black rhinestones. Then I outlined the letters with the black spikes I purchased that had self adhesive backs to add some 3D/texture. Lastly, I reused these fun black and colored spiders and hot glued them around the letters. I bought them last year from Hobby Lobby and I love the colored glitter on their backs!

I hope all of you are enjoying the beginnings of fall! I am excited to enjoy these next few months and all of the fun things that they bring. I am currently cozied up for the night and watching some Sunday night football as I relax and prepare for a new week. Thanks so much for reading and I’ll see you again next Sunday!!

Thanks so much for stopping by! I’m so glad you’re here. It’s nice to meet you (or see you again if you’re back for more)

Please take a look around the site! A good place to get started and learn a little bit more about me is by following the ” ABOUT ” section at the top of the site

Any comments, questions, suggestions, or collaborations please use my contact form by click ” CONTACT ” at the top of the site and I will get back to you ASAP!